The story behind Royal Grass® Sense

The launch of a new product usually precedes an intensive innovation and testing period. Similarly to Royal Grass® Sense, which we introduced recently. With Royal Grass® Sense we conclude forever with the prejudices that exist about the appearance of artificial turf. We have been working with Royal Grass® since the day we started to make the most natural artificial turf. That inspired us to come first in 2005 with the V-shape and introduce MiNT in 2014 (Micro Nerf Technology); V-shape fibers with less reflection, more rape and a soft feeling.

The idea for the technique to realize Sense came about a year and a half ago in cooperation with our suppliers. Although we had already made a huge impact with MiNT, we found that artificial turf still had a somewhat static look. Often all fibers are in the same direction, creating a very uniform image, while nature is often a bit wilder. We wanted to duplicate that.

To get to Sense we created a process with the V-shape so the fibers will “fall” in multiple directions. By playing with raw material mix, temperature and mechanical stretching we came to a fiber that is strong enough to give resilience, but soft enough to create a realistic looking product. We tested them with different root zones and in different types of tuftsettings. Tufting can be compared to a sewing machine. It is the process of adding the grassfibers in the backing. Eventually, 48 different prototypes were created.

Royal Grass® Sense was presented during the International Sales Meeting (ISM) in February 2016. With more than 65 dealers present from all over the world. An exciting moment. You can be very enthusiastic about your product, but it was especially important how it was received by our dealers. They should eventually sell them in their market. Eventually 3 of the 48 samples were part of the test. Two samples of 52 mm with both a different density and a sample of 36 mm. The open 52mm type was chosen by our dealers. That’s what we went on. 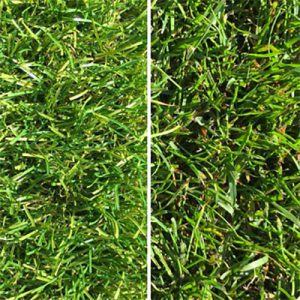 The final result is groundbreaking, a beautiful, soft and natural looking artificial grass. With Royal Grass® Sense we are not only introducing a beautiful product, but also an innovation in the field of artificial turf called ReaDY®. ReaDY® means ‘Realistic Directional Yarn’, the artificial turf fibers have been edited in an innovative way. Each grass fiber thus finds its position in its own way and behaves independently of other fibers.

After the Sales meeting we choose Belgium as a testmarket. Our dealer network in Belgium tested Royal Grass® Sense ‘in practice’. In Belgium more than 7,500 m2 of Royal Grass® Sense has been installed successfully in 2016. Dimitri Vanclooster of VD Kunstgrassen, one of our dealers in Belgium, says that 80% of his customers choose this product. Sense is expected to quickly capture a position in the top of best-selling species in Belgium.

After this succesful introduction in Belgium we have now begun Sense’s global rollout. So far it’s very well received in countries like America, the Netherlands and England. One thing is for sure: Royal Grass® Sense will give astonishing looks to anyone who finds out that this is not a natural grass, but artificial grass.